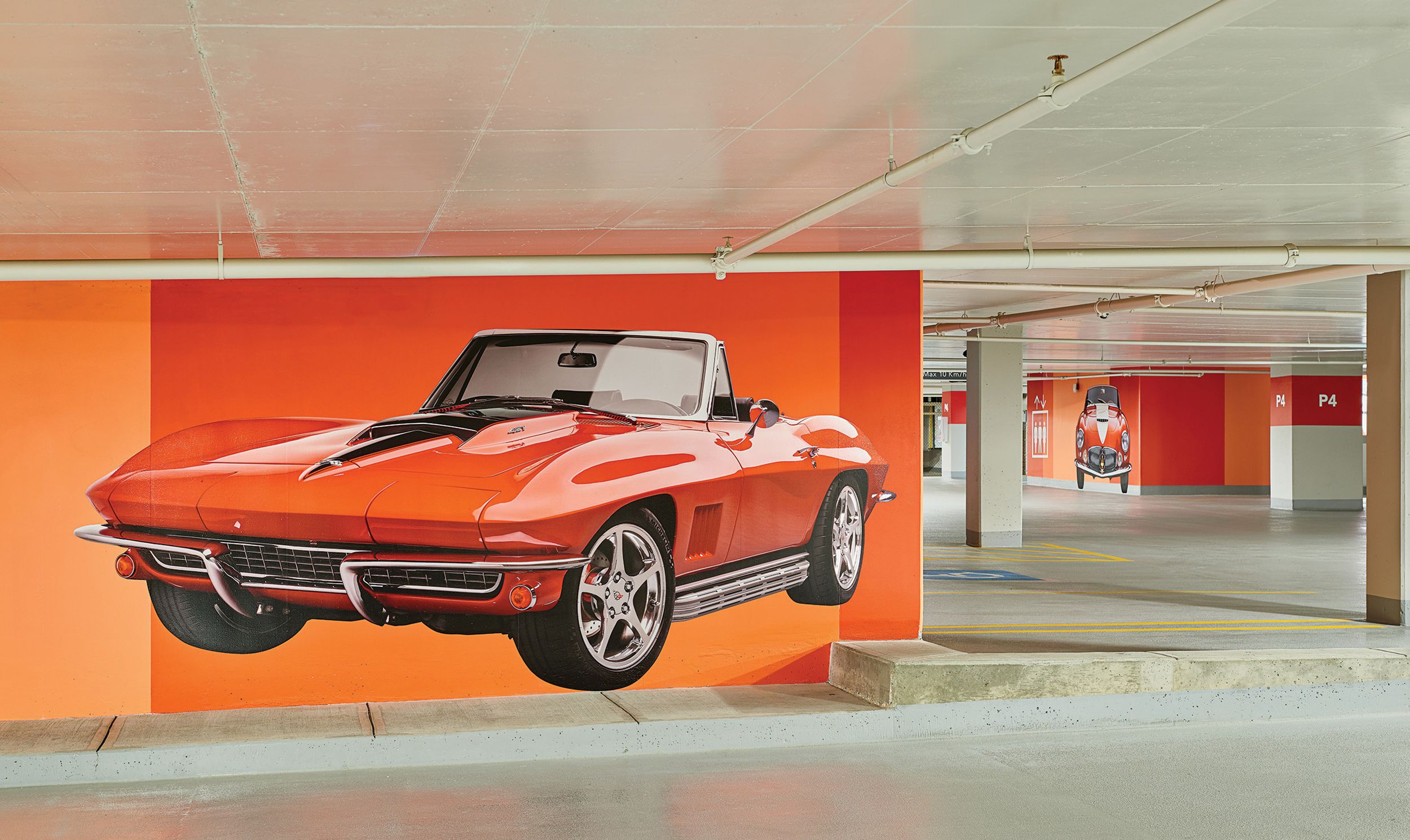 Parkades are perceived by many to be unsafe, unfriendly, back of house experiences. At Enbridge Centre, the desire of the owners, Pangman Development Corporation and John Day Developments, was to counter this perception by considering the parking environment as carefully as other elements of the tower development, to make it a positive, safe and user-friendly experience. 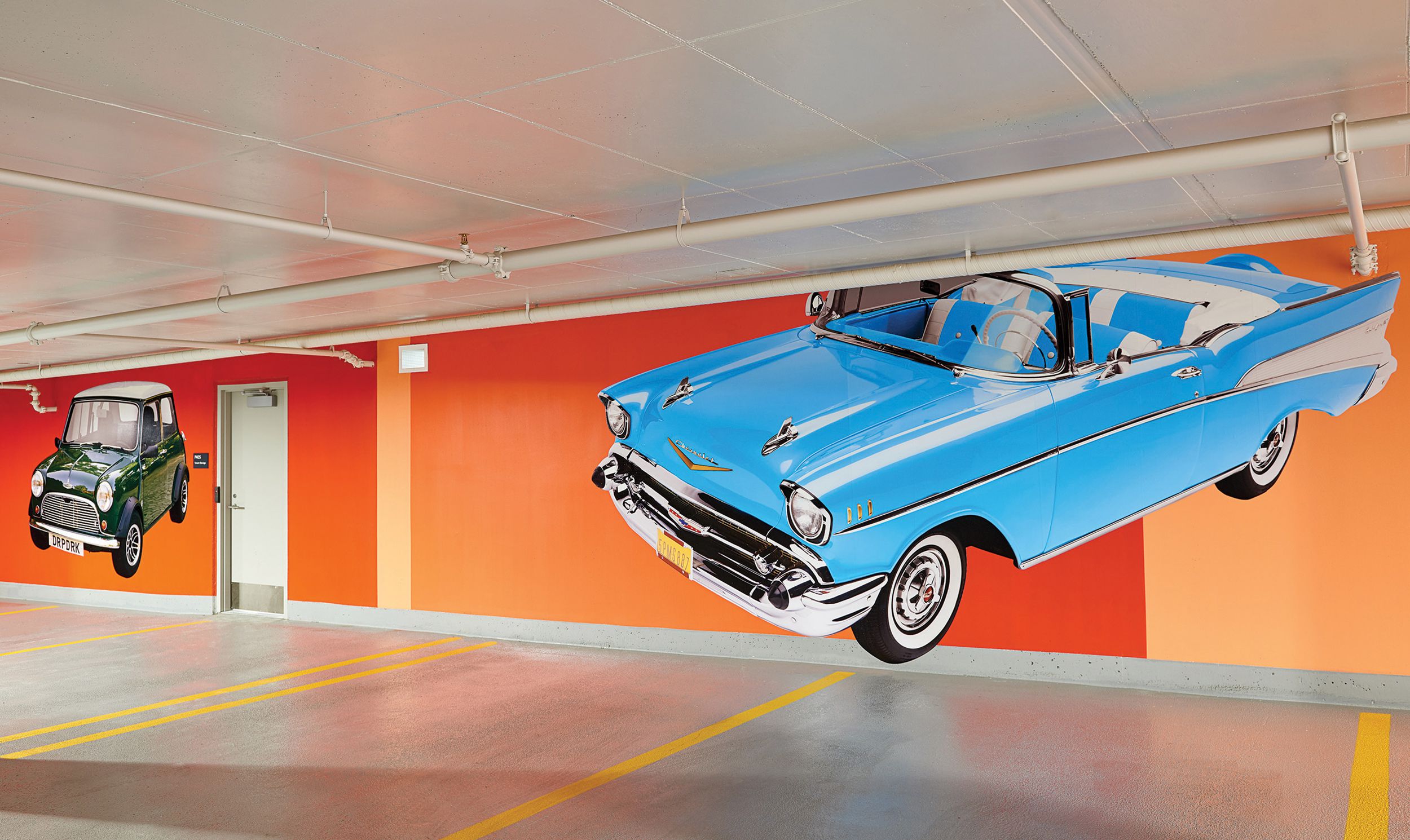 The architectural and engineering design of the parkade answered many issues through better lighting, finishes and clear sight lines to the tower shuttle elevators. Entro responded by creating a thematic approach to wayfinding that would positively enliven the space and provide for better orientation. The concept is a celebration of the car itself – by creating a gallery of classic and contemporary cars in a space for cars. 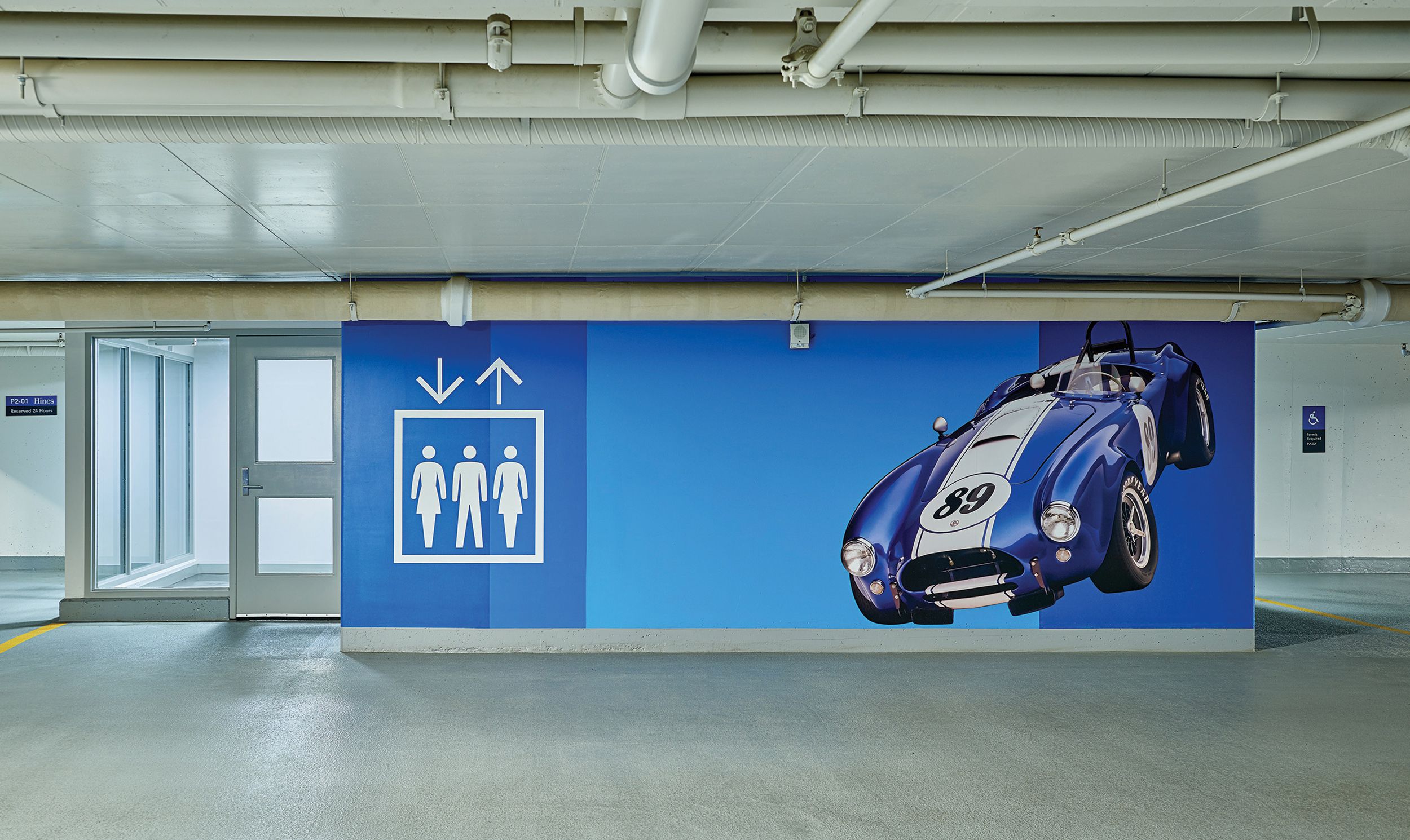 Fifty curated photographs of automobiles and motorcycles are set against the bright, multi-hued colours of the building’s core, animating the journey up and down the five levels of the underground parkade and distinctly marking each of the elevator vestibules. With today’s automobiles becoming more alike and the future one of self-driving cars and shared autonomous vehicles, these images provide a personal connection to the experience of driving and an appreciation of classic automobile design in all its variety. This is the house of cars – classic cars, minis and bugs, high performance cars, muscle cars and classic bikes, TV show cars, hybrids and electrics, cars we love, cars we’ve owned, cars we’ve always wanted, cars we’ve coveted and cars we can’t afford. 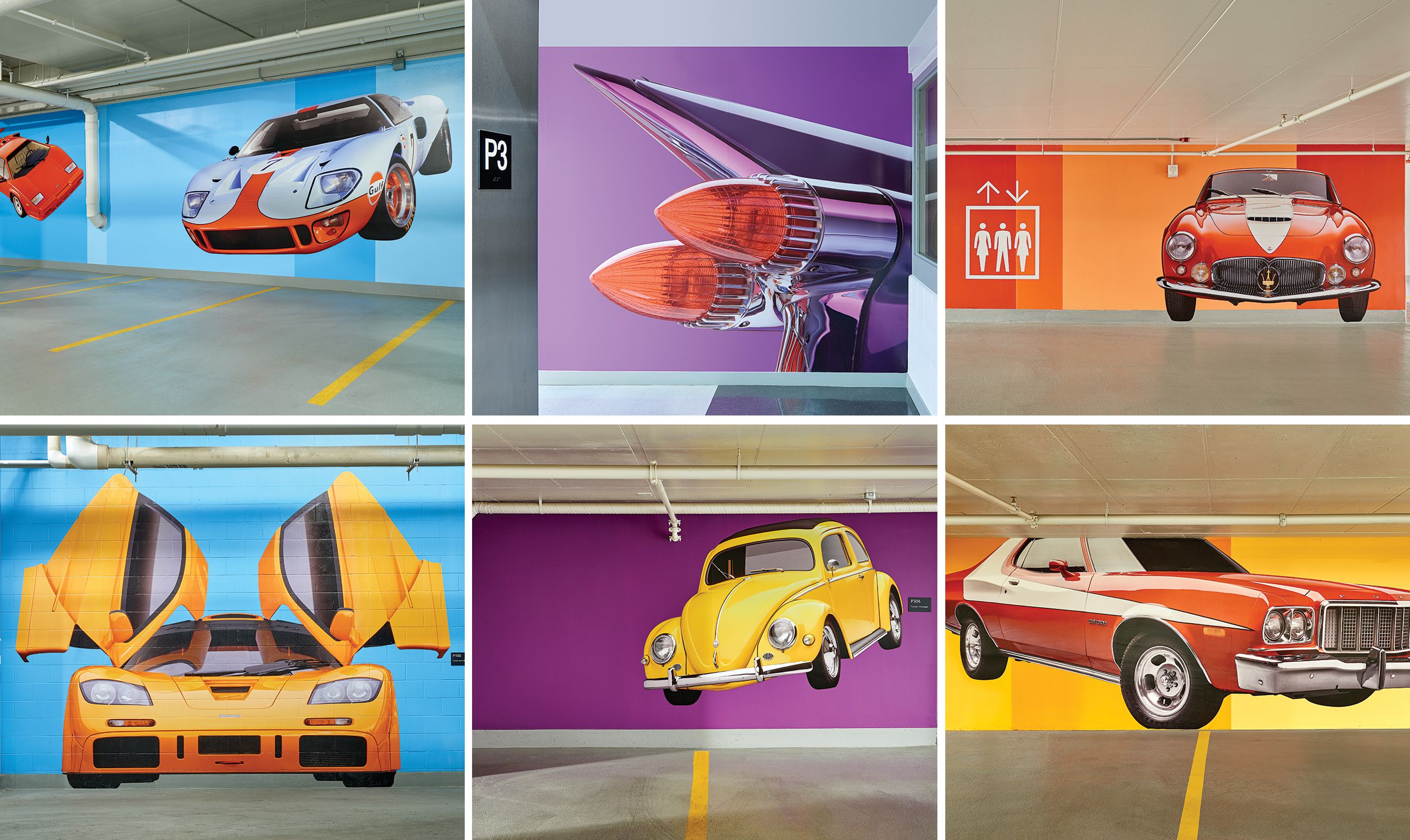 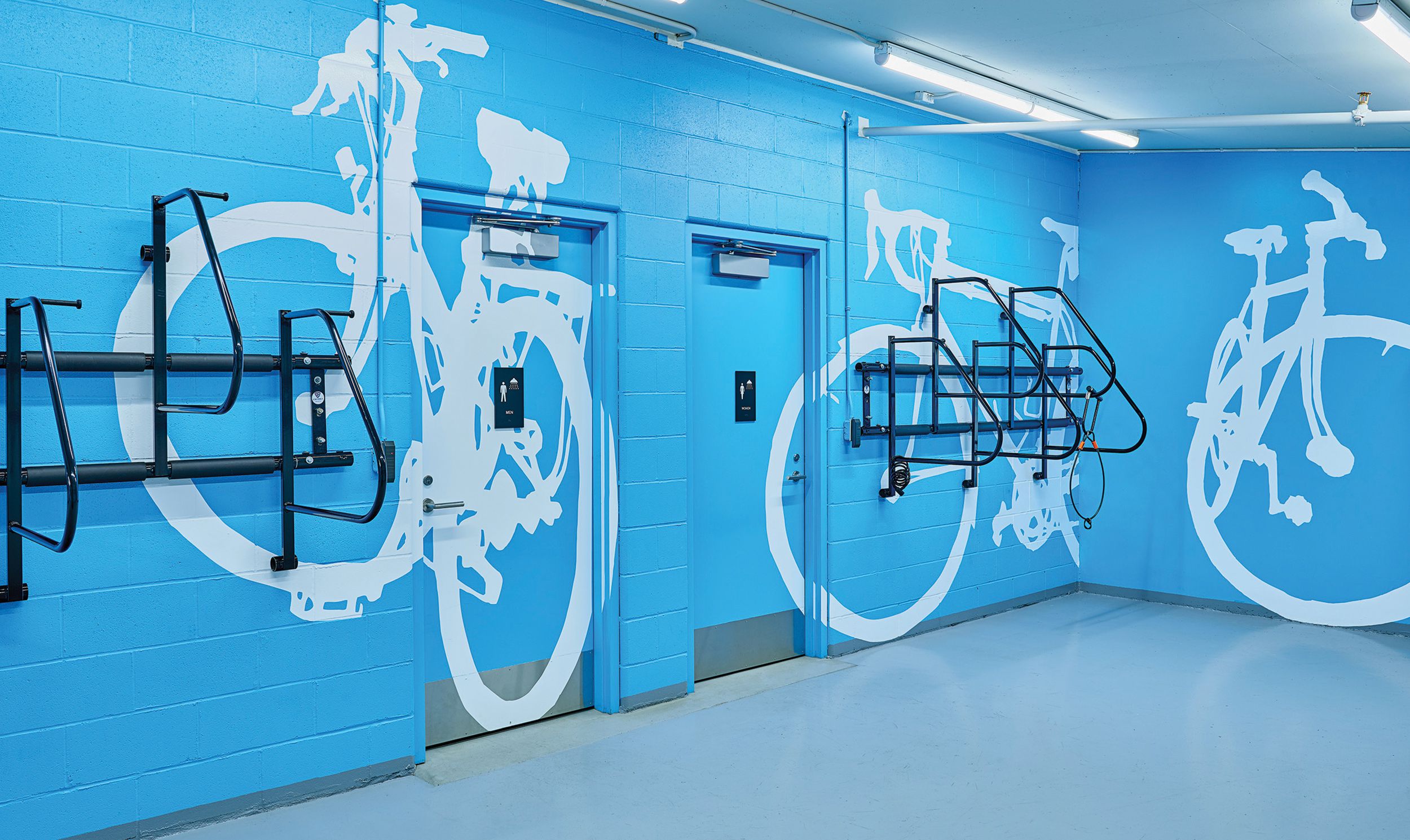 This is also a house of bicycles - three bicycle storage and locker room facilities are located on the second level, each a different and brightly painted colour, displaying oversized silhouette cut-outs of bicycles created by Brooklyn artist Taliah Lempert. The intent here was to provide a refreshing, friendly environment for the commuter cyclists in their transition to and from work – to go beyond a typical utilitarian approach to bike lockers to achieve a unique visual impact in contrast with the automobile imagery. 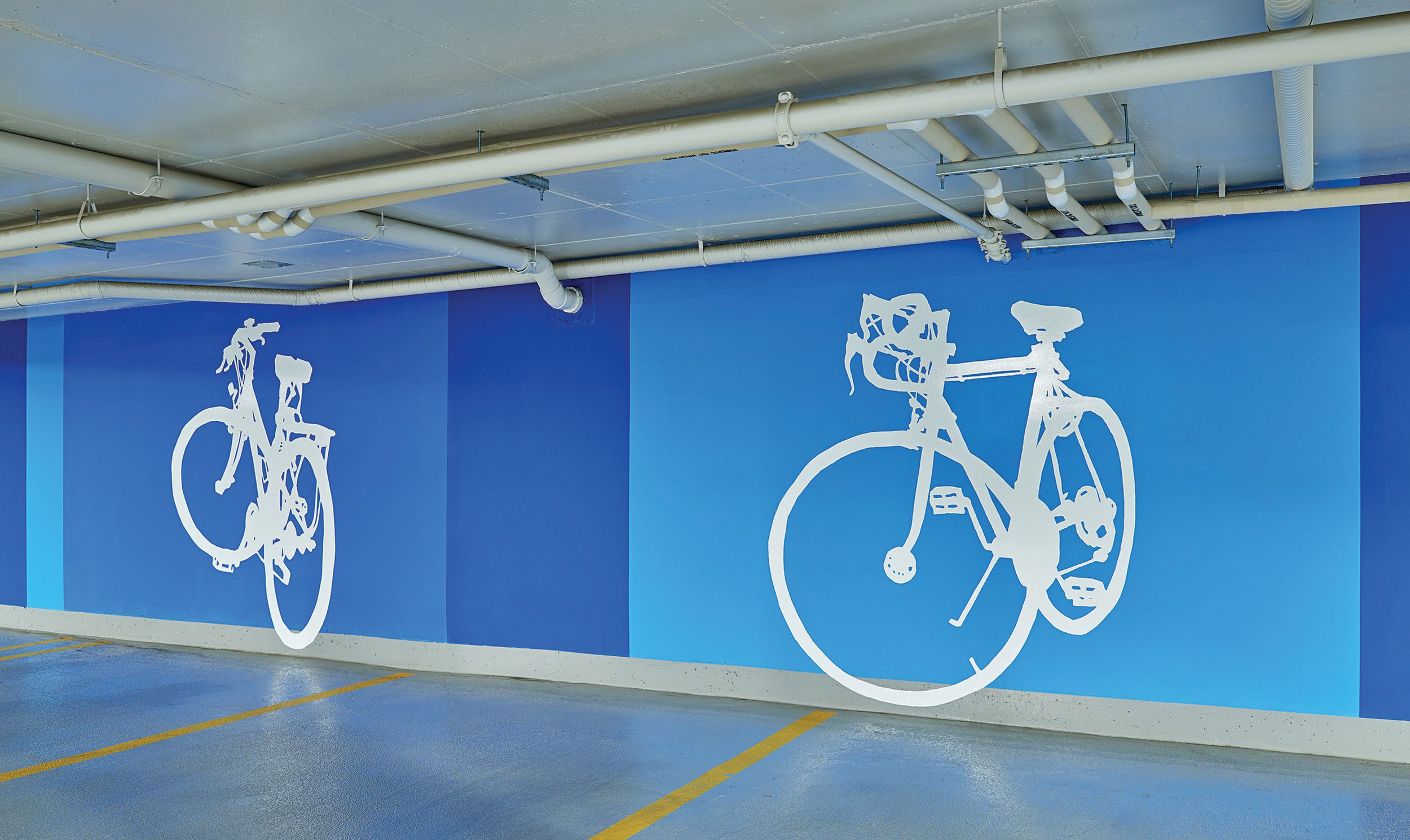 There has been a lot of positive reaction to the program and several people have said that it has made the parkade feel safe. They say the parkade feels active even when it is relatively empty, an interesting and unexpected result. Through our collaboration with the owners, we have accomplished what we set out to do – to change what can be a bland, uninspiring type of environment and make an everyday experience more enjoyable.

Find out more about the Enbridge Centre here.